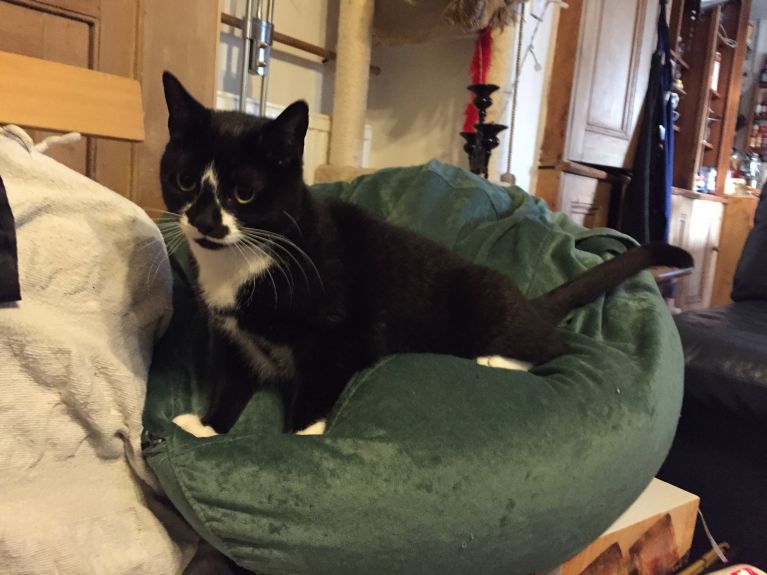 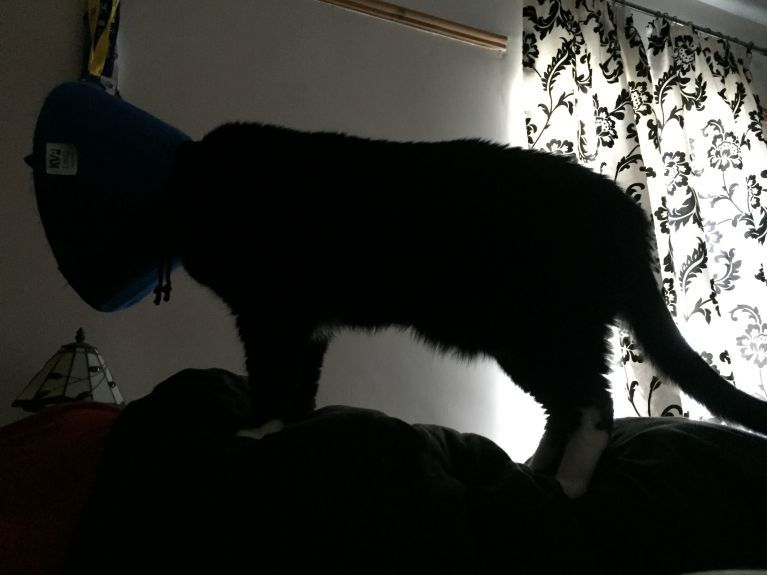 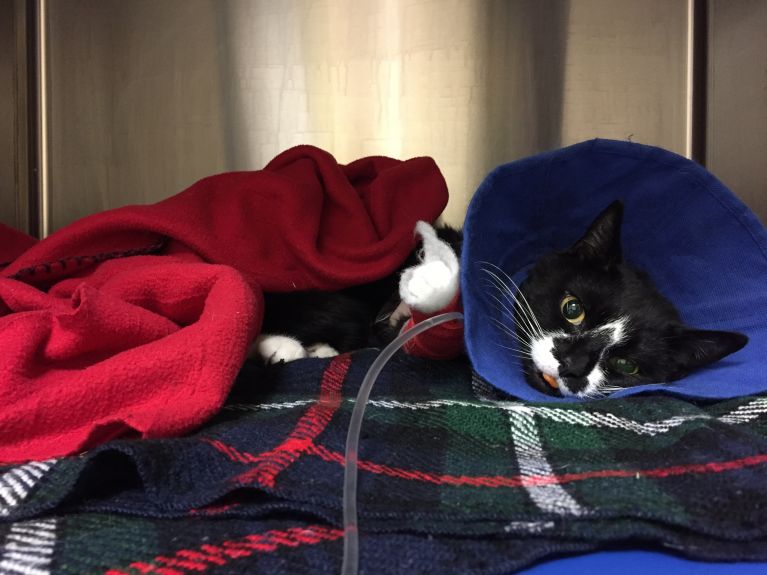 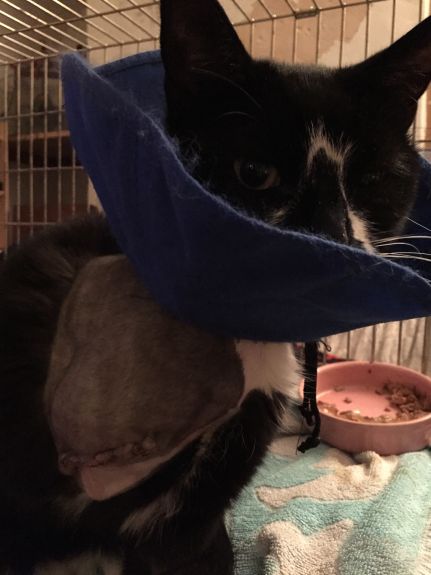 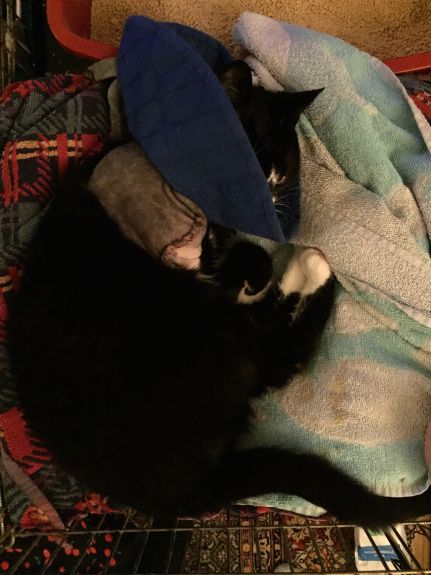 Crumble and her litter twin Apple, are our two tuxedo moggies. They are 7 years old and rulers of our household. We adopted the pair very young, 5-weeks old from their mother Dolly, who has about to move house and was not blessed with the warmest of maternal instincts.  By the time we came to retrieve them she was already hissing and chasing them off, so small as they were, it was decided it was time to move them on.

Being as they live almost entirely indoors (we live on a main road), we’ve been fairly blessed with almost no causes to visit a vet in the past few years bar the annual check-ups, one cystitis event and a very scary 48 hours with Apple and a stray ribbon she coaxed out of a sewing box.  When Crumble’s foot became noticeably a bit stinky, we were fairly quickly alerted to the fact that something was up, but we never for a moment imagined it would lead to a cancer diagnosis.

On first phoning the vet we were told that ripped claws were commonplace and if she was still bothering it in a few more days then we should bring her in.  We hadn’t popped her claw out so when a week later the vet did just that, revealing a nasty looking abscess, we were pretty shocked.  Crumble endured a week of antibiotics and the ‘lampshade of shame’ and the infection began to clear. What was left was a small half-pea sized lump between her toes.

“It could be a granuloma”, the vet explained “caused by her licking the wound.  Keep her on the antibiotics for 5 more days and bathe the toe in salt water and let’s see if it starts to go down.” 5 more days, no more foot-stink, but no disappearing lump either.  This was the point where we consented to the general anaesthetic and an excision of what at this point, was starting to look sinister, but maybe was just a large polyp, attached as it was on a stalk beside her claw.

“We’ll have the lab results in a week and will give you a call”.

Less than 48 hours later and the call came.  Osteosarcoma.  My heart stopped. The vet Benedette (Bebe), carefully and calmly explained what this means for cats – not the terminal sentence it is for a human, not as aggressive as in a dog, but nasty, and in need of rapid action if there was to be hope of a cure.

“How soon can I bring her in?”

“Can you make tomorrow at 9:45?  We would like to x-ray her to look for metastatic spread to her lungs, and if the x-rays are clear, we would advise you to consider amputation.  Radical surgery gives her the best chance of a cure. Go home and discuss it with your husband…” But I consented there and then, no more permissions needed; please don’t ask me to consent more than once to do this.  I drove home to my husband and we cried and held her and fussed her and cuddled that soon to be no more right limb, and probably freaked the poor independent mini-lion out with all the weird extra attention.

The general anaesthetic. The x-ray. Praying that the phone would not ring before late afternoon.  If the x-ray is clear, we said, please go straight to surgery, don’t phone us, don’t keep her under any longer than she needs to be, just do what you can.

At 12 the phone rang, startling us – my father asking how she was and if there was news.

At 3pm the word came through, she was awake, alert, and tripping on methadone.  More importantly the x-rays showed no mets, not even locally to the toe. Visitors were permitted. We went to see the films and the puss for ourselves.  More tears, relief, and now the long wait for the histology report on the missing forelimb. She may have been very lucky indeed. It might be that the tumour started in her nail bed and grew out rather than inwards.  We are keeping everything crossed.

So what we now have is a grumpy, tripawd pussycat living in a dog crate for safety until the stitches come out.  She is already balancing well, but I am a little disconcerted when I see the ghost foot being waved in a litter-burying manoeuvre that she does not yet quite realise isn’t achieving much.

She will be fine, of that I have no doubt, she will just need a little adjustment time. Her sister Apple though, is not fine with this at all.  Crumble smells of vet and drugs and the great unwashed (I’ve tried dealing with this last part but she gets *really* annoyed).  There has been hissing and growling and short, fast, low crouch sprints from the cage.  Bedding is being swapped about, Dreamies are being handed out like the sweets they are. More than rehabilitating Crumble walking, we have a sisterly relationship to support repair of.

So where are we now? 5 more days and hopefully the stitches can come out, and then Crumble herself, and maybe we will also know the lab verdict by then too. 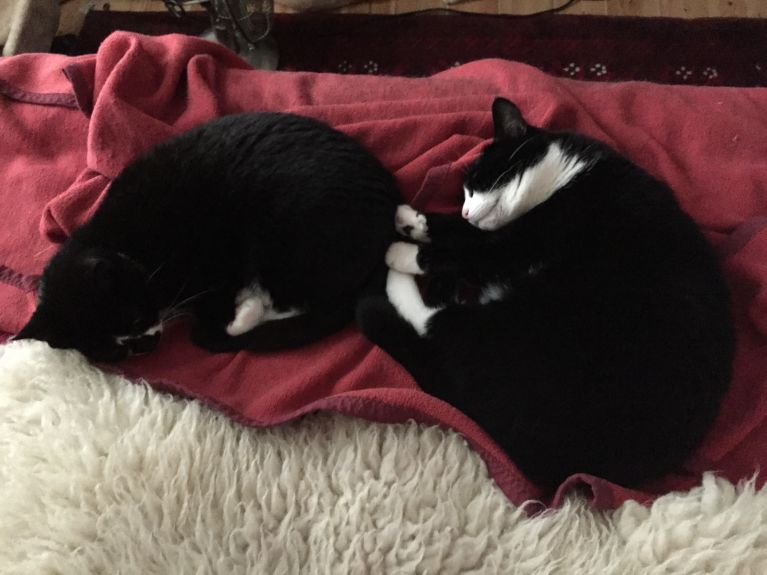 Add an excerpt to your posts to provide a summary for readers in many blog themes!

Read this for important information!

Welcome to Tripawds. Please read on for important tips. This is your first post. Edit or delete it, then start blogging. Don’t miss our helpful WordPress tutorial videos if you need help getting started with your new Tripawds blog.

Please publish a new post (or edit this one) to share your story. The Tripawds community is only notified of new blog posts in the Recent Posts widgets found throughout the News blog and discussion forum pages. Members will not be notified of any comments made on this default first post. You can also choose to edit or delete your sample page.

Publish a blog post or your site may be deleted!

Please be sure to publish at least one blog post to let us know you that you may use your blog. NOTE: Failure to do so may result in your site being deleted. If you upload photos to your Media Library, but fail to publish a post, we’ll never know they are there and they may be gone forever!

Another way to ensure your site does not get deleted, is to upgrade it with a Tripawds Supporter subscription.

By default your site will be indexed so Tripawds members will be notified of your update in the Recent Posts lists throughout this community. If you change your Privacy settings to discourage search engines, your posts will not be indexed!

To limit the amount of spam you receive, any first comment a reader makes on your blog will require moderation. Be sure to “Spam” any inappropriate comments, and approve those from your readers so their future comments appear immediately. You can change your comment options from the Settings -> Discussion tab in your dashboard.

Tripawds Blogs shall NOT be used for fundraising purposes.

Direct appeals for financial assistance to help cover care expenses will be deleted without notice. Everypawdy in the Tripawds community faces their own share of high expenses related to surgery, recovery and care. Veterinary financial aid resources can be found in the Tripawds News blog. Please see the Tripawds Fundraising Appeals Policy for more information. Thank you for your understanding.

Thank you for sharing your story, and happy blogging!

About Your Tripawds Blog:

New Tripawds Bloggers: Please review your default first blog post at left for lots of helpful links for getting started with your blog or review the Help Videos in your dashboard. Edit these widgets from your Appearance settings to remove this notice, upload a custom header photo, or choose from 130+ themes, and much more!

Crumble is brought to you by Tripawds.
HOME » NEWS » BLOGS » FORUMS » CHAT » YOUR PRIVACY » RANDOM BLOG